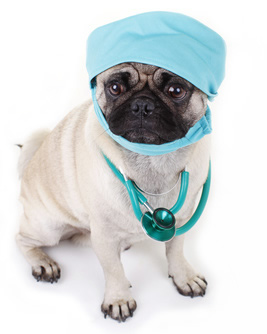 Neutering involves removing the reproductive organs to prevent unwanted breeding and to reduce disease risk. In males this means removal of the testicles, in females removal of the uterus and ovaries.

The normal age for neutering females at 6 months of age. Neutering a bitch before the first season decreases the incidence of mammary tumours in later life to less than 0.5% in comparison to unnetuered animals. After the first season the risk increases to 8%, and after the second it increases to 26%. Removal of the uterus and ovaries also prevents conditions such as ovarian cysts, pyometra, uterine torsion and prolapse, and is helpful in controlling false pregnancies. Aside from the medical reasons it can be extremely inconvenient to have to deal with a bitch coming into season every 6 months.

Castration of a male dog is a much simpler operation than neutering the female. It is often carried out for behavioural reasons, principally to prevent unwanted breeding, but also to prevent or reduce aggression, wandering, antisocial behaviour, and urine marking. Therapeutically it will help to alleviate or prevent certain types of prostatic disease, prevents testicular tumours, and is useful when dealing with certain hormonal disorders and perineal hernias. Castrating dogs will not replace training!