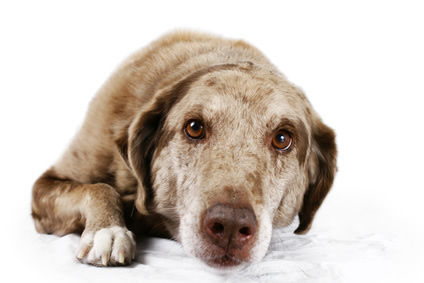 This arises when the amount of enzymes produced by the pancreas is insufficient to properly digest the food eaten by the animal, as a consequence carbonhydrates and fats are passed within the faeces in an incomplete state of digestion. This causes large volumes of pale faeces and increased appetite. Because the animal cannot digest the increased amount of food a progressive weight loss will develop. The enzyme production is low because the level of functional pancreatic tissue is small, either due to poor development of the pancreas (pancreatic hypoplasia), in which case the problem will present in the young animal (generally less than 3 years old), or it is due to damage to the pancreas by disease or inflammation, for example in cases of recurrent chronic pancreatitis, which generally occur in older animals.

This is a relatively common condition, especially in German Shepherd dogs. The onset of the problem is gradual, the dog remains bright and lively, the appetite is increased with weight loss and soft light coloured faeces. The diagnosis can be confirmed by testing for pancreatic enzyme activity by measuring trypsin like immunoreactivity (TLI).

The treatment involves altering the diet to create a high protein, low fat food containing no starch. There are prescription diets available designed for these cases. Addition of commercially prepared pancreatic enzymes to the food will aid its digestion.

Because the pancreas also produces insulin, diabetes mellitus is a potential complication in some animals and may require insulin treatment.

Cancer of the pancreas is a condition affecting mainly middle aged and older animals. The main type of cancer is the pancreatic adenocarcimoma. It arises in the pancreas and often spreads to the local lymph nodes and the duodenum. It can also involve the liver.

The development of the tumour is gradual but the clinical signs can be sudden in onset and the course of disease usually lasts about 3 weeks. the clinical signs usually involve weight loss, vomiting, and anorexia. Occasionally jaundice can occur, and some animals may show signs of diabetes mellitus or pancreatic insufficiency

It may be possible to palpate a mass in the front of the abdomen, if not then abdominal X-rays are useful. Definitive diagnosis often requires surgical exploration.

There is no effective treatment for this condition since the tumour is likely to have spread by the time a diagnosis is achieved. The prognosis is very poor.

This condition develops as a result of the pancreatic enzymes being released into the surrounding tissue, resulting in damage to that tissue. Depending on the severity and duration of the problem a small percentage of cases may have an associated diabetes mellitus.

These animals are usually presented with dullness, restlessness, anorexia, vomiting, and occasionally diarrhoea. The abdomen may be painful, the animal dehydrated and feverish.

The diagnosis is helped by laboratory tests which will show a raised level of pancreatic enzymes including amylase and lipase. Liver enzymes may also be raised due to associated liver dysfunction, and an increased number of white blood cells may be observed. On some occasions diagnosis can prove difficult and surgical exploration may need to be carried out to visually assess the condition of the pancreas.

The basis of treatment is to withhold food while maintaining the animal on intravenous fluids until the inflammation has settled, mild cases can resolve after 48 hours. Severe cases can show signs of shock and should be treated aggressively with fluid therapy. Painkillers may be required. After the fluid therapy and once the clinical signs have settled then small amounts of water can be offered orally, and then the reintroduction of high carbohydrate food. Following recovery the patient should be kept on a low fat diet.

This develops after recurrent episodes of acute pancreatitis, or after pancreatic infection. These impair the production of the pancreatic enzymes, which in turn interferes with the digestion of food, it can also interfere with the production of insulin leading to diabetes mellitus. It may be more common in obese animals and those that have high fat diets.

This problem is likely to have a prior history of episodes of acute pancreatitis involving periods of inappetance, fever and vomiting. The clinical signs involve dullness, increased appetite and large quantities of pale, rancid smelling faeces. If diabetes develops then excessive thirst and urination will follow. Weight loss and a poor coat are common.

In order to diagnose this condition blood tests will reveal a low functional level of pancreatic enzymes (using the TLI test) and some other changes that may be associated with diabetes mellitus.

The treatment involves treating the diabetes with insulin and adding pancreatic enzymes to the food. The diet should contain a high level of protein, low fat and no starch.