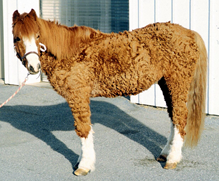 Pituitary Pars Intermedia Dysfunction (PPID) is the correct term for Equine Cushing's Disease. It typically occurs in older horses but has more recently been found in equines less than 15 years old. The varied clinical signs associated with PPID are caused by an overactive area of the pituitary gland. Most patients only show one or two of the clinical signs associated with Cushing's and many of these are more cosmetic than clinically significant, with the obvious exception of laminitis. Cushing's is not a new disease but we are diagnosing it more often, due to improved testing, horses living longer and the relationship between Cushing's and laminitis.

The most common clinical signs are:

Hirsutism – excessive hair growth causing the classic long, curly coat that often fails to shed until late in the year (or not at all)

Muscle wastage – can give a dipped back appearance

Increased thirst and urination - usually indicated by the bed being wetter overnight.

A degree of insulin resistance

Laminitis - this is the most serious complications of Cushing's. If a horse has untreated Cushing's Disease, it is more likely to develop laminitis and the laminitis will be more difficult to control.

If an equine has any of the clinical signs suggestive of Cushing's, a blood sample can be taken to check ACTH levels in the blood.  The time of year is taken into account when comparing the results to the reference ranges, as horses naturally have a higher resting ACTH level in autumn. Should the results be inconclusive, a further test called a Thyrotrophin Releasing Hormone (TRH) Stimulation Test can be used to assess the animal's response to stimulation to release ACTH.

Lifelong treatment is required using a drug called pergolide, the licenced preparation of which is Prascend® (Boehringer Ingelheim).  It comes in tablet form and helps manage the signs of PPID, to keep the affected animal healthy and active. ACTH levels should be monitored regularly to find the correct, effective dose of pergolide.

Aside from medication, careful attention needs to be paid to management, to limit laminitis and support the immune system.

Treatment for Cushing's will be lifelong but should allow the affected individual to remain healthy and help protect against laminitis and other associated clinical signs.