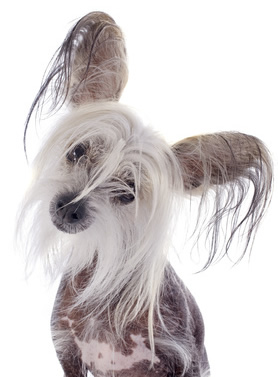 Skin problems in dogs are a common occurrence, the most common variety of problems encountered include parasitic infestations such as fleas, mange or lice. Allergies are common and can be caused by fleas, food, contact with sometimes mundane substances, or in the form of atopy, a hypersensitivity reaction within the skin. Pyoderma is a bacterial skin infection, often developing as a result of an underlying problem and is extremely common in the dog compared to other species. Fungal infections such as ringworm, and yeast infections such as Malassezia can occur as independent infectious agents, or as a complication of another problem. Environmental skin disease caused by contact irritation is common in some breeds. Nutritional skin problems are now rare but vitamin A and zinc deficiencies can cause problems if the diet is not properly balanced. Psychogenic skin disorders arise as a result of excessive licking or chewing of the skin for behavioural reasons, although sometimes there can be underlying infection or allergy problems. Seborrhoea is a group of disorders affecting the keratin layers of the skin, leading to a greasy or dry coat, and finally endocrine problems are hormonal imbalances which can manifest themselves through skin or coat changes.

Differentiating between these problems is not always easy, sometimes the cause is obvious in the cases where parasites such as fleas or lice can be found in the coat, other times more complex investigation is required. Many times the primary problem is not the skin abnormality but is related to other body systems.

Your veterinary surgeon will wish to know when the problem first started , the age of the animal, the first abnormality noted, whether the problem has been sudden or gradual in onset, which area of the body is affected, whether the condition has spread, does it itch, is there a seasonal variation, are other animals or people affected, diet, any change in your pets environment, any previous treatment and responses to treatment, and other facts relating to the general health of the animal.

Simple tests that can be performed to aid the diagnosis include the following:

Other, more complex investigations, that can be carried out include:

In some cases inconclusive results can be obtained and your veterinary surgeon may opt for trial therapy to decide the nature of the problem. He/she is likely to use a single treatment for a period of time and then assess the response, this is particularly useful in some cases of parasitic and bacterial infection, and may indeed be carried out in preference to some of the tests outlined above.

If further investigation is required after this then it may be of value to take skin biopsies for histopathological examination.

This is a common skin disease of the dog and may be defined as a pruritic skin disease due to the development of a Type I hypersensitivity to common environmental aeroallergen which may be genetically determined. Wire haired breeds, West Highland White terriers, Bull terriers, Boxers and English Setters may be predisposed. Atopic disease in people is also associated with exposure to environmental allergens and may produce three diseases - asthma, hay-fever and skin diseases. It can be useful to compare hay-fever in man with atopic disease in the dog when explaining the nature of the allergy.

Development of a hypersensitivity to common environmental allergens.

The main complaint is itch. Signs usually appear between 1-3 years of age with a range of 6 months to 6 years. Itch is concentrated on the feet, underside and face. An allergic ear inflammation is often present. Conjunctivitis and rhinitis (sneezing) may be found in a small number (less than 10%) of cases.

Hair loss, skin inflammation and excoriation are common due to pruritis. Saliva staining, due to continual licking of the feet results in a brown discolouration of the hair in those dogs with light coloured hair. In chronic cases the skin over the feet, axillae, abdomen and groin may become thickened and pigmented.

The history and clinical signs can be very suggestive of a diagnosis of atopic disease but it is essential to investigate thoroughly to eliminate other possible causes of itch and conduct diagnostic tests.

The main differential diagnoses are:

Initial investigations should therefore always include examination for skin parasites through combing and examination of scale and skin scrapings. Therapeutic trials using insecticidal preparations and antibiotics may also be indicated. A restriction diet to rule in/out food allergy may also be used.

This may be employed to try to identify the allergens to which the animal has developed a hypersensitivity. Currently in the UK two types of tests are available:

Small amounts of potential allergens are injected intradermally. If mast cells are present that are sensitized by IgE to the injected allergen then degranulation of the mast cells results with release of vasoactive substances which produce a wheal at the injection site.

A blood sample is obtained and tested for reaction against potential allergens.

Guarded. It should be explained that there is no cure for atopic disease and because of the nature of the allergens involved preventing exposure is nearly always impossible.

Treatment is symptomatic and aimed at controlling the itch. A variety of therapies are available:

These work very well but have the potential for producing harmful or unwanted side-effects. Prednisolone is the glucocorticoid of choice as it is of low potency and short acting. A typical regime would be prednisolone at 1mg/Kg daily for 5-7 days then the same dosage but given once every second day as a single dose in the morning for 7-10 days then gradually reduce the dosage by 2.5-5mg until the minimal controlling dosage has been determined.

Alternatives to prednisolone include dexamethasone or triamcinolone. Long acting injections should be avoided.

While they work well in man they often give poor results in animals. They are, however, worth while trying and will control 10 - 15 % of atopic dogs. Several classes of antihistamines are available and it is usual to try 3 or 4 different classes before deciding that antihistamines will not work in any individual.

These have been shown to be able or control 10-15 % of atopic dogs. They are free of side-effects but can be expensive. The normal dosage is 50mg/Kg per day.

It is thought that certain types of essential fatty acids alter the arachidonic acid cascade so that the prostaglandins produced are less inflammatory than would otherwise be the produced.

There is some evidence that combinations of essential fatty acids and antihistamines are more effective than either used individually.

The success rate is very variable but about 50% of cases should benefit from hyposensitisation. If successful boosters have to be given, usually at intervals of 3-4 weeks for the remainder of the animal*s life.

Antibiotic treatment to control secondary bacterial infections, shampooing to remove scale and debris and the use of emollients or skin moisturisers to hydrate dry skins may be of great benefit to some atopic individuals. In some mildly atopic dogs these treatments alone may lower the itch threshold to a tolerable level for patient and owner.