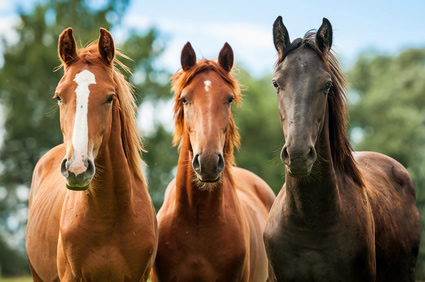 We now offer in-house worm egg counts. This is the most accurate way to determine whether your animal requires to be wormed. Worm egg counts can be perfomed in place of routine worm dosing and therefore wormers are only administered when necessary. Please discuss frequency of testing with one of our vets. Frequency will depend on number of horses, type of yard and any previous results.

Listed below are examples of timings of dosing during the grazing season depending on the family of wormer chosen. Regardless of the type of wormer in use all dosing regimes should include, in March and 6 months later in September, a tapeworm treatment using either Strongid P, or Pyratape P at double dose. The same wormer should not be used for consecutive years to try to reduce the build up of resistant worm populations. We recommend using a four year cycle of the regimes listed below.

NB. The dates of the preceding doses determines the exact start in March.

Double dosing on March the 31st, followed by repeat dosing at 6 week intervals on May 14th, June 25th, August 6th, and double dosing again on the 17th September.

For young stock use Pyratape P every 4 weeks.

The interval between July and September is shortened to fit in with the 6 month interval for the tapeworm dose.